Missouri State University’s Ad Team beat out six universities to claim first place in the national AT&T Campus Marketing Challenge, a competition for the best AT&T marketing and research campaign targeting college students. The Ad Team is part of a marketing class and operates similar to an advertising agency under the direction and supervision of Dr. Melissa Burnett, professor of marketing. 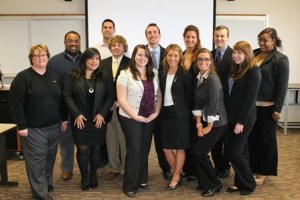 The Ad Team — which is made up of select students in the College of Business — developed and implemented a semester-long marketing campaign and presented the results to AT&T executives in Dallas on May 28. The “inTEXTicated” campaign taught students about the hazards of texting while driving through events, social media, advertising and public relations.

“Missouri State University wowed us. We were impressed with their in-depth research, creativity and presentation,” said Chris Roy, AT&T Vice-President of Government and Education in the Western Region. “This challenge gave us the opportunity to tap into the energy and enthusiasm of young minds. Not only did they benefit, but we did as well by gaining deeper insight into the behaviors, beliefs and aspirations of our next-generation leaders and customers.”

As a part of the AT&T Campus Challenge, the student teams were given $3,000 and equipped with mobile phones and other tools to implement a marketing plan for AT&T mobility services and the “It Can Wait”, campaign to end texting and driving. The students were responsible for sales, retail, public relations, sponsorship, talent recruiting/retention and marketing communications on their campuses.

Earlier in the semester, the Ad Team hosted the “Textulator Challenge”, which served as an eye-opening event to promote awareness of the “It Can Wait” campaign and showcase the dangers of distracted driving. In it, students competed in a game of Mario Kart while responding to text messages sent to them by members of the Ad Team, dodging virtual turtle shells and banana peels the whole time.

The Ad Team has a rich history of national success, and we are proud to congratulate them on another wonderful campaign. The team members included: