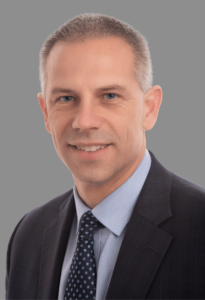 Matt Linski turned his own tragedy into an opportunity for others.

One month before Linski graduated from high school in Sedalia, Missouri, his father died unexpectedly.

It was a devastating loss. Shortly after his father’s death, his mother moved to Atlanta and Linski followed some friends to what was then Southwest Missouri State University.

“It was the rebirth of my life,” Linski said. “I had to grow up. I learned how to do laundry, how to present an insurance card to go to the doctor. I couldn’t go home on the weekend with three piles for mom and dad to do. All the stuff I never had to do.

“Missouri State has a special place in my heart. There is something about it.”

During his time here, he formed friendships that he still maintains. Linski was involved in the Financial Management Association while on campus.

He graduated with a finance degree in December 2004.

Fast forward three years. In the pre-dawn hours, Linski was driving to work and heard a radio commercial for Big Brothers Big Sisters. He thought about how he had enjoyed a wonderful father for 18 years and how other kids weren’t so lucky. It inspired him to get involved and become a “Big,” a mentor.

Linski also made a commitment to himself to fund a scholarship at Missouri State. He wasn’t making enough money at that point, but was making more than he had expected so early in his career.

He fulfilled that promise in 2014 when the Edward Linski Memorial Scholarship was established in the College of Business.

The man behind the scholarship

Edward Linski was an engineer, devoted father and humble man.

“He was an extremely personable guy. He inspired me. He lived by the golden rule. Everything he did was to treat others fairly. He would thrive in this environment because he never saw age, race, skin color,” Linski said.

Edward was an engineer at Hayes Wheels, a factory in Sedalia.

When Matt was in college, he interned with Hayes Wheels and learned that his father’s kindness had not been forgotten.

“People came up to me and said ‘Out of all the suits, your dad was the only one who would come down every morning, get to know people, buy donuts, be friendly.’ It meant a lot,” said Matt.

The Edward Linski Memorial Scholarship was first awarded in the 2014-2015 school year. Preference is given to students who have lost a parent, with secondary preference for students in finance and general business.

Each year, Linski is able to read a letter from the recipient and has met with a number of them.

It’s been incredibly rewarding for him and his family.

Aside from the scholarship, Linski has worked with Jeff Jones, department head of finance and general business, and regularly offers to speak to classes or meet with students one-on-one. Linski says Jeff Jones has been instrumental in helping Linski get reconnected and stay connected.

When he’s a guest speaker, Linski talks to students about the importance of networking.

“When I go back and speak to students, I say if you are in the room with three students, take the risk and go talk to them. It’s easier to do it in college than in real life. Practice in college.  Face time is important,” he said.

If it wasn’t for networking, Linski may not be where he is today

Back when Linski was in college, he was shooting pool at Harpo’s bar in Springfield one night and met some professionals. They talked, and one of the men, Ray Yakle, told Linski to send his resume in by 8 a.m. the next day and Ray would hand it in to Bank of America.

Despite staying up late, Linski had his resume to Ray the next morning. That landed Linski an interview, which landed him an internship, which led to his long career with Bank of America.

When Linski was 37, he was named president for Kansas City and he was one of the youngest market presidents in the company.

It was a proud moment but not about ego or the title.

“It became a chance to connect with 600 teammates a new way. It was a chance to follow in the footsteps of my dad, be genuine, humble and get to know people.

“My story is unique. I do not have an MBA. There were no handouts for me. I gave this company a lot and this company gave right back. It has given me a chance to grow,” he said.

Linski lives in Olathe, Kansas with his wife, Theresa, and their sons, Carter and Tate. He met his wife at Harpo’s in Kansas City. They had gone to high school together and one July evening, Linski walked in and saw her working there. He chuckles and says he owes his marriage and job to Harpo’s.

Hard work, dedication, mentors, Missouri State and a supportive family have helped Linski get where he is today.

And he wants to give back what he’s
been given.

“Missouri State provided me a rebirth,” Linski said. “I could have chosen a path that was dark after losing a parent at a young age. MSU allowed me to pivot and take on new things. I want to give back to students and professors in any way that I can. Go Bears!”