Michael Owens says he wouldn’t be where he is today without mentors like Dr. Philip Rothschild, director of the entertainment management program.

When Owens, a Springfield native, enrolled at Missouri State University, he planned to be a teacher but soon discovered entertainment management.

“I love live music. I never really understood that there was this entire business ecosystem behind the band playing on stage. When I discovered that, and discovered it was a college major, it was a pretty easy decision to change course,” he said.

During college, he had two internships that helped shape his future: one at the Gillioz Theatre and one at Live Nation, the world’s largest concert promotor.

After graduating in December of 2009, Owens accepted a job at a rental car facility because he needed income immediately.

After two weeks, he received a call from Dr. Rothschild, director of entertainment management and board member of the Gillioz.

The theater had reopened after undergoing their multimillion-dollar renovation and was having trouble booking shows.

“They thought because of my internship with Live Nation, that connection, I might be able to come in and help book content and breathe new life into the theater. So, I took a pay cut to go to the Gillioz, but I knew that that was my opportunity into the industry and really was the catalyst from there for the rest of my career,” Owens said.

The young graduate was driven and started blindly reaching out to promoters and agents to try to get the Gillioz on their radar.

He booked a few shows that did well, and that led to more. “All of a sudden we had this calendar that was full of events, full of ticketed recognizable names in the concert and comedy touring industry. So that obviously brought in revenue and helped solve a lot of the problems,” he said.

During that time, he married an alumna, Jennifer, an art teacher at Ozark North Elementary.
Two years into his stint at the Gillioz, Owens accepted a job as director of booking at BOK Center in Tulsa. 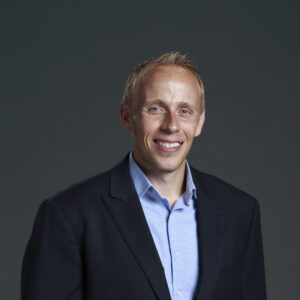 “Dr. Rothschild has served three roles: he’s been professor, mentor, and employer. He’s committed and he’s invested in the students and wants to see them succeed. He’s a great asset for that university.”—Michael Owens

Here’s how booking works: If a big name act is doing a 30-date tour, they will immediately fill 25 dates with major markets like Chicago and LA.

But they have to get from point A to point B and that is where the smaller markets come in and they are all competing for that show.

“It’s measured by the level of hustle and how hard you work to show those promoters and agents why that show will be more successful in your building than any of the others. And that’s what we’ve been good at. When I say ‘we’ I mean the entire team at the arena. That has led to growth and future opportunities and has brought me where I am today. It’s all a relationship business, and it is achieved by being on the radar and having a relationship with the key decision makers behind those artists.”

After four years in Tulsa, Owens moved to Vancouver, British Columbia, to work for the NHL team that owns and operates Rogers Arena in Vancouver.

It was a bigger market, a professional sports team, and a “must play” arena in the touring world.

While in Canada, he and his wife had their second child. While Owens loved the job, it was difficult to be so far from home with two small children.

After two and a half years, an opportunity opened up to be the assistant general manager at Chesapeake Energy Arena in Oklahoma City, home to the NBA’s Oklahoma City Thunder.

They were closer to home and it gave him a chance to hustle again “to come in and change the identity of Oklahoma City as a concert destination, which we were incredibly successful at.”

That success led to his dream job, where Owens currently works as vice-president of programming for the Moody Center in Austin, a $340 million project.

The Moody Center is being developed by Oak View Group, a company founded by two iconic leaders in the industry: Tim Leiweke and Irving Azoff. Leiweke built one of the world’s largest sports and entertainment facility operators and Azoff is one of the most iconic music managers, managing names like The Eagles and Fleetwood Mac.

The Moody Center is a partnership between Oak View Group, the University of Texas, Live Nation, and Matthew McConaughey.

“Those four parties saw a need. Austin is the live music capital of the world, but there’s never really been a world-class arena here for artists to play,” he said.
As of April, there will be.

The 15,000-seat arena will open at the University of Texas in April. And when it does, it will be a massive operation with 65 full-time employees and more than 1,000 part-time staff.

Owens says this is his dream job and he plans to put down roots in Austin.

His career has been peppered with rewarding moments.

On a micro-level, he’s proud of the big shows he’s managed to book, like when he landed Coldplay for the BOK Center in Tulsa.

“To be the squeaky wheel with these agents and promoters, and constantly pounding their phones and emails with Tulsa, Tulsa, Tulsa, and then fast forward two years, and Coldplay comes out on stage — that is a big moment,” Owens said.

Undoubtedly, there are more proud moments to come as Owens continues to carve out his career path.

But opening a venue is his dream, as it is for many in the industry.

And that is not lost on him.

“I consider myself very lucky to be able to do what I do and to be able to love what I do,” Owens said. “I know that a lot of people don’t get to do that. I’m really lucky and I try not to take that for granted and because of that, that drives me to succeed. I don’t want to lose it.”