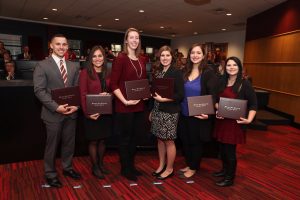 Congratulations to Kimberleigh Eng, a 2016-2017 Citizen Scholar! Kimberleigh, who has been a graduate assistant since January 2016, was honored with this annual public affairs award on December 15, 2016. She is from Woodbridge, VA, and will graduate with her MBA and marketing certificate in May 2017.

Designated by the Board of Governors, the Citizen Scholar Award is given to students who have contributed to the university, advanced the university’s public affairs mission and have been significantly engaged in extra-curricular accomplishments and/or significant service activities in the community. Kimberleigh was nominated in part for her outstanding work on the MeetLEO campaign with the spring 2016 Ad Team, on which she served as president. 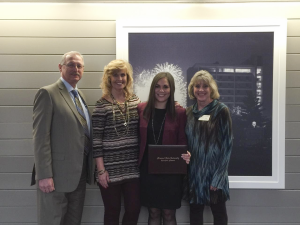 MeetLEO was a social media campaign designed to bring community members and law enforcement officers together. Their website and social media accounts featured videos with law enforcement statistics as well as personal accounts from officers about what their job means to them. Ad Team also organized events where police officers and groups of students could interact, one on Missouri State’s campus and another at a middle school in Kansas City.

The celebration on December 15 included a ceremony at the Board of Governor’s meeting and then a dinner afterward. In addition to the crystal globe award, Kimberleigh will have her name added to the Citizen Scholar wall in Plaster Student Union.