You are here: Home / Archives for Lanny Asepermy 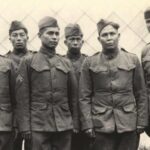 Native Americans contributed a military tactic crucial to saving lives among U.S. troops in both world wars: use of their Native languages.   The direct Native languages and coded vocabulary based on them – named code talking – secured the U.S. military’s communications. The tactic ensured that even if enemy armies intercepted U.S. military messages, they couldn’t decipher … END_OF_DOCUMENT_TOKEN_TO_BE_REPLACED