You are here: Home / Archives for Melissa Burnett 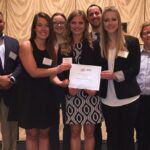 For the fifth year in a row, Missouri State University’s Ad Team proved unbeatable in a national advertising competition sponsored by EdVenture Partners. The team of 17 students, led by Dr. Melissa Burnett, professor of marketing, competed against 15 other teams in the American Fuel and Petrochemical Manufactures (AFPM) Recruitment Challenge, Spring 2017. They got to the final … END_OF_DOCUMENT_TOKEN_TO_BE_REPLACED