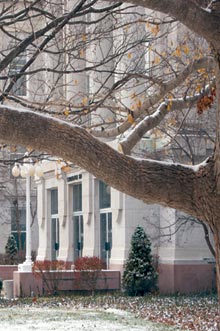 Today, we are posting revised and updated draft material for the 2011-16 Long-Range Plan. I invite you to review these items and provide feedback.

We have posted the following drafts, all of which are part of the whole:

These current documents reflect the input we received from the campus community, as well as the further refinement by the Steering Committee, the work groups, and others. We also benefited from the work of Larry Gates, former Missouri State University and University of Missouri administrator who conducted focus groups and helped guide all of us through the process.

The major change you will see is that we have moved “diversity/inclusive excellence” from a strategic direction and included it in both the Community Principles and as one of the overarching commitments. The Steering Committee wanted to elevate inclusive excellence in recognition that it is more a value than a strategic direction; it provides part of the foundation for all we do.

The Steering Committee and work groups are now developing performance measures and specific targets for each of the objectives. We will share those with the campus community in the near future and again seek your input on them.

The final step is to develop specific tactics to achieve the performance measures. These will be developed at the major unit level and include timelines and those responsible for implementing.

I informed the Board of Governors at its October meeting that we do not want to sacrifice quality to meet an artificial deadline; therefore, we will not expect to have a draft of the document until sometime in the early part of 2011.

In the meantime, I invite your input on any or all three of these documents. We are trying to collect those comments by Wednesday, Dec. 22.