In this issue of Clif’s Notes, I review the governor’s budget recommendations for fiscal year 2015, update you on new academic programs, recognize staff award winners and provide a status report on facilities. 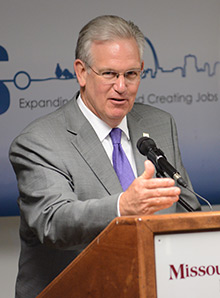 I want to summarize the governor’s recommendations for higher education and how they impact Missouri State:

For more information, I invite you to visit the office of administration website which has more details about the budget recommendation.

Again, this is the first step in the process, but it is a very good first step. We look forward to working with our legislative delegation to make these recommendations a reality. I will keep you posted on our progress.

In the meantime, the Executive Budget Committee will meet Friday afternoon to begin discussing the options available and the decisions we will need to make in the coming months.

We continue to be a progressive campus in curriculum transformation actions focused on meeting student needs. 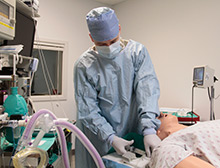 In December, I reported that the Board of Governors had approved two new academic programs: Doctor of Nursing Anesthesia Practice (DNAP) and Master of Fine Arts (MFA). We have several new graduate and undergraduates programs and certificates either fully approved or in latter stages of the processes for approval. I wanted to provide an update for you.

These degrees will now be presented to the Board of Governors and then be forwarded to the Missouri Department of Higher Education for review and then approval by the Coordinating Board for Higher Education. The MS in Applied Behavior Analysis will be strengthened if the governor’s Caring for Missourians – Mental Health program holds and becomes a reality. 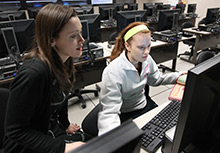 A number of new certificate programs have been approved and require no further faculty action or state approval. They should be open for students this coming fall. All of these are based on already existing courses, and they are a way to package a combination of course work that may be attractive to some people who either already have a degree or may be thinking they want to try a certificate first. All of these will roll into a degree if a student decides to continue work. They do get marked on a student’s transcript if the student files the requested actions.

Certificates approved in the past two months include: 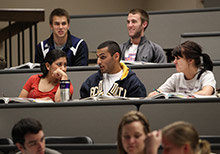 Two undergraduate majors and one minor were also approved by the Faculty Senate in December. The majors are a reconfiguration of current offerings and the minor is an interdisciplinary approach. They are:

Just to remind you, we are not always adding programs. We also look for programs which are appropriate to discontinue for any number of reasons. Most recently, we eliminated all BA, BS and BSEd Programs in French, German and Spanish (comprehensive and non-comprehensive).

On Jan. 8, we had one of my favorite events: the annual Staff Awards Luncheon. Nearly 900 staff members attended the event where we recognized 225 employees for outstanding work and longevity milestones. I wanted to pay special tribute to two groups of honorees.

The Staff Excellence in University Service Award is given annually to six Missouri State staff members in recognition of significant contributions to the University community. The purpose of the award is to recognize those staff employees who strive to do their jobs well on a daily basis, those who go above and beyond the call of duty in a special situation and those who have contributed in a significant way to the success of the University.

The winners of the 2013 Staff Excellence in University Service Awards are:

The Excellence in Community Service Award is given annually to two Missouri State staff members in recognition of their service to the community through volunteer work with charitable, nonprofit, church or similar organizations. (We honor two faculty in the same way each year.)

The award is presented to those who have demonstrated personal action to serve community causes; a significant and sustained record of volunteer service; a significant contribution to improve the quality of community life; the upholding of values consistent with the betterment of society; and being in good standing with the Missouri State community.

My congratulations and thanks to these and all other staff members who were honored this year. Well done.

Changing the face of campus

Work on several facilities is well underway. I described these in the August 2013 issue of Clif’s Notes. We are proceeding with our plan to issue bonds with the full support of the Board of Governors. I thought it would be helpful for me to provide a status report on those projects.

This project has expanded to a $6 million project that will include general scheduling classrooms on the second floor and social work on the first floor. This is in addition to the third and fourth floors being home to hospitality and restaurant administration. The work will begin in June 2014, and the completion date is now July 2015.

Instead of expanding McQueary Hall, we have determined it is more cost-effective to construct a new facility. Construction on the $20 million facility will begin in fall 2014 and be completed in time for fall 2015.

The design development has been completed on Glass Hall. The work will begin when private gifts are secured.

This facility, which will be used for student admissions and success, will cost $4.5 million, with work to begin in the summer of 2014 and completion scheduled for August 2015.

A major renovation of Kentwood Hall and refreshing of Hammons House and Hutchens House will occur in the summer of 2014. Sunvilla Tower will be fully renovated between fall 2014 and summer 2015. The total costs of these renovations will be $16.1 million.

As you can see for yourself, work on all of these projects has begun. All are on schedule and the budgets remain as planned. As you know, the Jim D. Morris Basketball Complex in JQH Arena has been completed and the Mary Jo Wynn Achievement Center in the Forsythe Athletics Center is scheduled to be completed by Aug. 31, 2014.

The spring semester is off to a good start. We anticipate another record spring enrollment, we have many exciting events on the calendar, and the campus facilities are changing every day. I wish you a productive and positive semester.

A love for a language and a passion for teaching have taken December graduate and Spanish major Adria Baebler on quite the adventure. For Baebler, that adventure began with a volunteer opportunity through the office of citizenship and service-learning.

As a sophomore, Baebler volunteered as a tutor for students within the Monett and Verona school districts. This opportunity connected her with the Hispanic Initiatives Program and the Hand in Hand Multicultural Center, where she would help provide translation services.

“Working with Spanish speakers inspired me to pursue a different aspect of Spanish: teaching it to someone else,” said Baebler. She soon put that new interest to work volunteering at Boys and Girls Town of America (BGTA).

Her love for Spanish and quest for fluency in the language then took Baebler abroad to Seville, Spain.

“During my time in Seville, I was also given the opportunity to be an English conversation assistant at a local school in Alcalá. Once again, I was surprised by how much I enjoyed teaching English to non-native speakers, and I decided to look into teaching English overseas as a possible career choice,” said Baebler.

Upon her return to the states, Baebler pursued her TEFL/TESOL certification to teach overseas. Now, she’s ready for her next stop: Uruguay. This fall Baebler received a prestigious Fulbright Scholarship to be an English Teaching Assistant for eight months.

“As I reflect on my journey from my first semester at MSU to now, I never would have imagined that I would be graduating a semester early or have been sponsored by the government to teach overseas. I’m very excited to start this new journey, and I can’t wait to see where I’ll be in a year!”