Position: Marketing Coordinator for Global Spectrum at the University of Phoenix Stadium 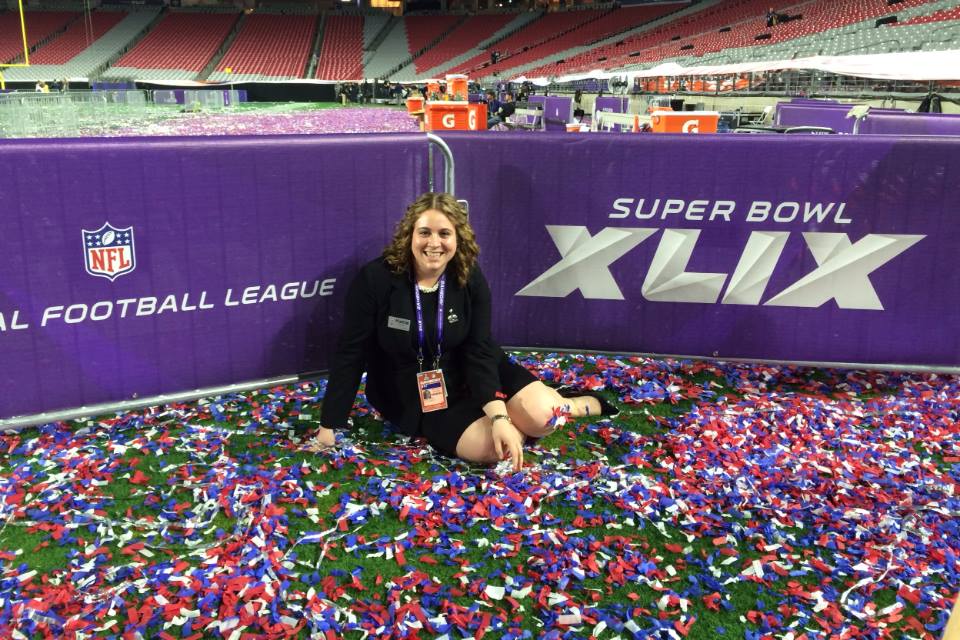 A lot can happen in just a few short months. For Katie Mulloy, those months took her from the classroom to the Super Bowl. Upon graduating from Missouri State last May, Katie decided she shouldn’t be afraid to apply everywhere and anywhere, even if it meant she had to move away from her family in the Chicago area. That led her 1800 miles away—to Phoenix. “Once I accepted my job out in Arizona,I booked a one-way ticket, packed three suitcases and headed out on my new journey.”

Katie is now the Marketing Coordinator for Global Spectrum at the University of Phoenix Stadium, home of the NFL Cardinals, 2015 Pro Bowl and Super Bowl XLIX. Her job includes updating and maintaining the University of Phoenix Stadium’s website, posting to all of the social media accounts (Facebook, Twitter, Instagram, etc.), taking photos during events, being a media liaison and writing media alerts and press releases.

Working the Super Bowl, “was an incredible experience, a dream come true!” She never thought, however, that her first job out of college would take her there.

Pulling off a big event such as the Super Bowl takes lots of work. Leading up to the big day, Mulloy helped with multiple media days, supplied photos and answered questions to media sources. She also took photos to document and archive the Super Bowl set-up and operations, as well as posted at least once a day on all the social media accounts, either informational or interactive content.

During the Super Bowl, Katie had many jobs. Before kickoff, she roamed the Fan Plaza and took pictures of the fans, field and stadium. During the Super Bowl, she posted once a quarter and during halftime to social media accounts. Katie also had the opportunity to greet some celebrities on the stadium’s loft level before game time.

Running the social media while a Super Bowl is occurring is no easy task. During the game, she had to run back and forth from around the stadium to her office to post. “At one point I was all the way on the west side of the stadium on the terrace level (4th floor) with two minutes left until the end of the second quarter. I still had to get back to my office, which is on the main concourse level and post to our social media accounts. Then I had to get back out there to get pictures of the Pepsi Halftime before it started. I did it; but it was just a little stressful.”

Her favorite part of the night, “was being able to go out in the confetti after the game and celebrate a job well done with my co-workers and after all of our hard work leading up to the event. Standing on the trophy platform was something I’ll never forget.”

Katie credits part of her job success to her Marketing classes at Missouri State. “The information I learned in Sherry Cook’s Marketing Yourself class has been used on a variety of occasions. For instance, I was at work sitting at my desk writing a piece for the website when I was randomly pulled out of the office to attend the State of the State address luncheon. I was seated with many with people from different companies. It was a three-course meal just like the class networking dinner.” By the end of the luncheon she had exchanged her business card with a couple of people and learned a lot from them. “It was the first time I had received a business card and now I have a collection going!”

In the future, Katie sees herself working another Super Bowl, and still loving the career path and industry she has chosen. As for new next big thing? “My ultimate goal is to one day get to work at the Olympics.”